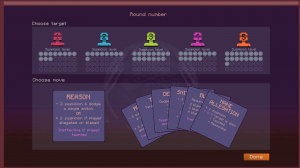 In a sinister society not unlike our own, a computer AI known as Agent Edward runs an experimental program under a secret government project called BIG TED. The sole purpose of BIG TED is to find scapegoats for propaganda purposes. This time Agent Edward is looking for four unlucky souls to take the blame for a staged extremist attack meant to draw the public’s attention away from new, more intrusive surveillance legislation.

Scapegoats is a local hotseat multiplayer game for five people. All five are innocent, but four will be convicted as criminal extremists. The game is played in rounds, with each player choosing a move and a target in secret; the moves are then played out simultaneously. The moves add to and subtract from the suspect’s suspicion levels, and the player with the lowest suspicion level at the end of the game walks away with a clean record.