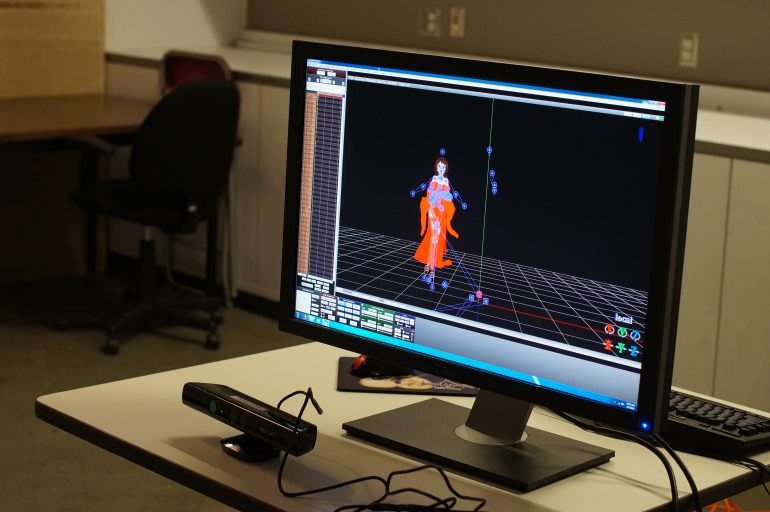 MikuMikuDance (MMD) is a freeware Japanese animation program created for Hatsune Miku, the Japanese Vocaloid popstar and feminized hologram. In MMD, 3D avatar bodies can be maneuvered, posed, and choreographed into various dance sequences through the use of motion data and digital manipulation. Critiques of Motion Capture, a technological process that converts dance movement into numerical patterns, often juxtapose data with embodiment, arguing that dance loses something living in the translation. This project considers not only how the organic dance body persists in data and animated renderings, but how the digital body might possess its own lively dance potential.

Using MMD as interface, Hilary Bergen and Michael Li enacted a choreographic translation with Bergen’s live dancing body, a PC, a Microsoft Kinect, and the choreography for 70s singer Kate Bush’s cult classic song “Wuthering Heights.” The motion data mined from Bergen’s performance of Bush’s choreography was then applied to Hatsune Miku’s avatar, inciting her to dance. In using the Kinect, a cheap motion capture application which produces an awkward, machinic aesthetics of the avatar body, this project calls into question the value of mimetic realism across multiple media, platforms and spaces, as well as across various bodies, both analog and digital.

Given its presentation of a thoroughly manipulable avatar body which is nothing but digital data, MikuMikuDance presents not only a new choreographic tool but a fantasy of control that goes unproblematized by its many users. Because the result of this “translation” is largely determined by the logic of the interface, with very few interventions “post-production,” it resists the polished, glossy aesthetic that MMD users usually achieve when editing videos of their dancing avatars: a seamless ideology of verisimilitude that reinforces problematic fantasies about the female body.

Dance is an index of embodiment that relies on movement, or doing, rather than being, thus giving it the potential to intervene with static notions of ontology, especially as related to gendered and racialized bodies. Seeking out modes of resistance to the notion of digital convertibility, this project is especially interested in moments of difference and disruption. With very few interventions or edits the actions of the machine and therefore allowing the distributed agency of the interface to produce a dance of its own. This project serves as a case study for a chapter of Hilary’s PhD dissertation, which examines the distributed agency of choreographic creation. A full length article based on this project will be published in a forthcoming issue of PUBLIC (Fall 2019).