It’s not okay to cry during a demo night… 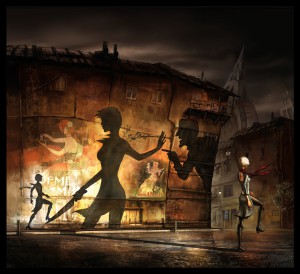 ed into the SAT, complete with puffy parkas and layers of scarves, to take in the annual IGDA Montreal Showcase.14 dev teams were selected for the showcase, each with a 7 minute session to demo their game.

The breadth of the Montreal games community was demonstrated by the vast distance between Ko-Op Mode’s Skipping Stones and the third installment EA’s Army of Two. Saleem’s Ko-op Mode session was a live poetry recitation accompanied by a group of seven landscape, where every stone skipped into the lake created interactive musical punctuation. The buzz of the crowd, by now restless and well into the second hour of the showcase, fell silent with the sound of the first stone. In contrast, Army of Two silenced the crowd by assaulting the senses with bleeding edge graphics, cascading screams and explosions, and sound jacked up so loud that I could feel the vibrations deep in my chest.

I don’t think many in the audience knew what to make of Skipping Stones (Is this a game at all if it doesn’t have any goals, rules, or points?). It was my first live poetry recitation, and so I suspect this was also new to many others. I wasn’t expecting to have to wipe my eyes amidst the pixel-love platformers and telepathic ninjas. Damn you, Ko-op.

I also wasn’t expecting the collective gasp of awe when Compulsion games cued up the splash screen for Contrast. (Seriously, check out the game’s website. Right now). We were greeted with hazy art deco/belle epoque visuals, slinky jazz music, and game mechanics – including cut scenes – premised on interacting with shadows. It was absolutely beautiful, reminiscent of an above-the-sea Rapture, and certainly something to watch out for. Honestly, now that I’ve seen it, I can’t imagine why more game developers haven’t followed Bioshock’s lead and jumped on this aesthetic.