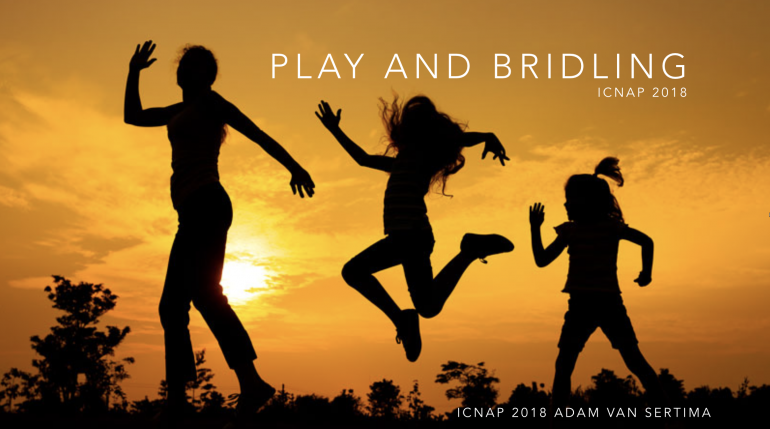 A central characteristic of play is that when at play, temporality shifts, and time is experienced differently from the operational, externally measured time of not-at-play. A phenomenological analysis reveals that one quality of play, is that the experience of play places us at an emotional remove from that which is absent, in the past or future. One looses track of time, meaning the external, instrumental time of labour, and of external, involuntary concerns. Bernard Dekoven alludes to games as building trust and relationships that transcend the transactional nature of a game. Implicitly, to play well, one must be very present with the other players, lest the tokens of trust and community be missed or misread. This temporality has great significance for that phenomenological method of the epoché, sometimes expressed as bridling or bracketing with its focus on what is immediately available to the senses.

Amedeo Giorgi characterises the ‘epoche’ as putting non-present phenomena and pre-suppostions drawn from past experience to one side. This bracketing focuss on the specific immediate senses of a given phenomema. For example, we might see a wrecked car, and conjecture it had been in an accident–we can imagine a moment of distraction, resulting the collision, and the likely aftermath for those involved. By bracketing, we only look at that we can intend to the ‘in the present’. What we can immediately perceive and describe, without resorting to objects and processes outside our immediate perceptual field. However, as Merleau-Ponty notes, as would many social science methodologies, this is difficult and never entirely possible. Thus more recent authors use the metaphor of bridling. Rather than attempting restrain the unruly field of connections that extend from the given phenomena, it is bridled, thus allowing it to move as it must, but guiding it.

The sense of the present, as opposed to absence, and as opposed to past or future, drives the potential of play in phenomenological research. The sense of being present in play allows for the affective state of mind that is focussed on the immediate sensory field. This method has clear application to objects of study such as games, sports and aesthetic activities that involve an audience’s rapt attention. I think it may have broader application.

The term play, in English, has many denotations, and can be applied to many activities. The activity is not as germane as the emotional-affective experience. In that sense, perhaps it is best if we consider play in its adjectival or adverbial sense. Thus a game or activity is playful, or not, depending on the attitude of the players. This is captured in Bernard DeKoven’s extended phenomenology in The Well-Played Game, which emphasises the attitudes of the players toward the game and each other over particular game mechanics, or even a particular game itself. If we consider the playful possibilities of human activities, then we can better bridle our phenomenological accounts of them.