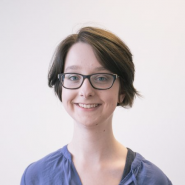 TAG Profiles is a blog series that explores the work of current TAG scholars. Rebecca Goodine is a multimedia artist and a master’s student in Concordia’s Design program.

Tell me a little bit about what you’re doing for your master’s.

Emotions and sensitivities is sort of where I’m situated with my current research — specifically, as experienced through physical game design and creative game design that is played in-person. The project that I ended up making for my thesis is a boardgame-type device that is played in groups, where people talk about what wellness and wellbeing means to them.

This game is called Colorfull. It’s played by gathering around with either friends or strangers. Through a series of short illustrated prompts and ideas provided by the group, you end up talking about wellness and what it means to you. It’s called Colorfull because the goal of the game is to fill up this custom made board with your drawings.

How do people draw on the board?

I actually went through a series of prototype iterations experimenting with the ways people drew on the game board. When I started, I was thinking it would be actual paper that you would color on with markers. However, I realized that those weren’t quite as tangible for people when I was doing playtests and what I ended up going with was whiteboard markers. 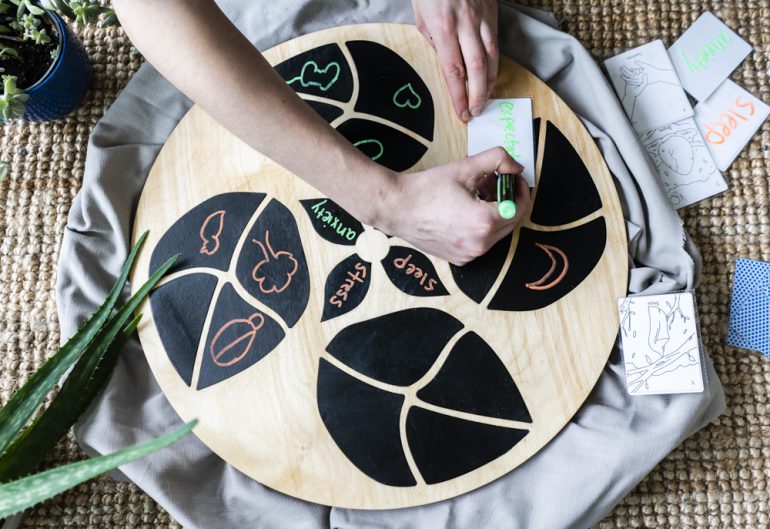 What sorts of workshops did you run?

The project really had three phases: The first was a series of participatory design workshops that I held over three weeks. I worked with 12 participants, who I would teach some basic game design concepts to before leaving them to create games of their own that would address stress (as a part of wellness and well being). Some of the participants had game design experience, but some of them had none at all. To me, the most exciting aspect was that they all left satisfied and enjoyed the experience, and they had all completed something by the end of it. This is actually pretty fast for game creation! One of the takeaways from that first phase of research was that everyone had a different idea of what stress was to them. It was certainly different than what I had expected.

That led me to the second phase of my research where I tried, on my own, to make a response to these sessions. This is when I tested the paper version of this project and I realized, again, my interpretation of stress was not necessarily what people playing my game felt was resonant. For example, I was a bit heavy handed with the prompts in making them too verbal, so people had some trouble relating to them. I thought: “perhaps they didn’t feel like responding to them because they were too specific?”

The third research phase is when I moved officially from stress as the subject for the game, to wellness/well-being as the subject of the game. Even though it seems like a small, verbal decision to change that, I really think it helped people approach the game. I also ended up including illustrated cards instead of the word prompts — I was definitely inspired by tools like tarot or exquisite corpse, which rely on free flowing thoughts and creative interpretation. The idea was to give people images and a creative space instead of one that was maybe too literal and more verbal.

Now that you’ve made Colorfull, what is your plan for it?

It’s currently living in my apartment which is, honestly, a little bit sad. To me, it’s both the blessing and the curse of physical making. These objects are so visually different and captivating, but in the end they are objects that often end up sitting somewhere and generally don’t move around. So once I have completed the written part of my thesis, I want to reflect on how I can make this game move beyond my apartment and think about how I can share it with more people and have it distributed it more broadly. 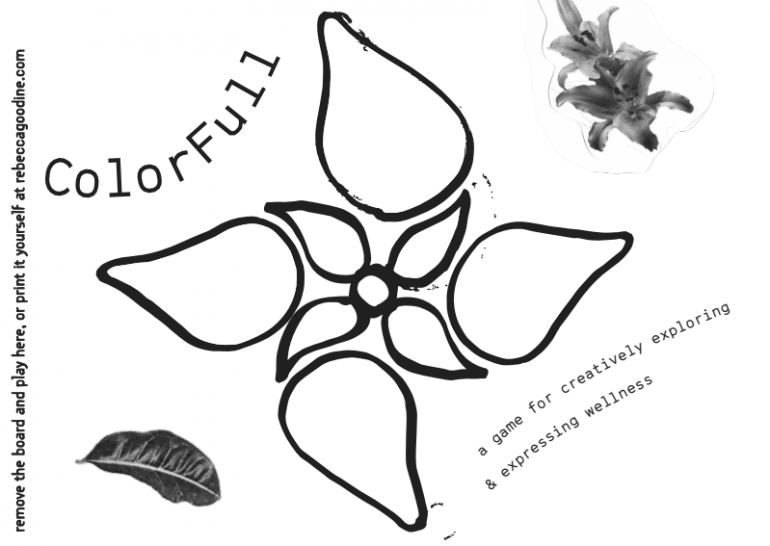 I did actually end up making a Colorfull zine for my program’s end-of-year showcase. I adapted the game to be in this little zine that can be printed off by anyone. And now, there’s a new wellness initiative that’s happening at Concordia, and they’re going to use my zine for one of their student wellness workshops. So the project does somewhat have a life, but it’s definitely one not on a board. It’s an accessible zine — a piece of paper that you can print and colour on.

How does TAG help you realize the goals of your project?

Well first, and it might seem like a minor thing, but to have a desk to work on in the lab was huge. I got a lot more work done at TAG than I ever would have done at home. Second, is the access to the great minds at TAG to talk to and learn from, and meeting my supervisor was really instrumental in figuring this out. And finally — and I hope it doesn’t sound greedy — but financially. TAG funding initiatives have been a huge help to be able to go to things like academic conferences. I recently went to CGSA in Vancouver, and although I didn’t talk about my project specifically, it was great to connect with other researchers to help influence the direction of my work.

You can find my work online at www.rebeccagoodine.com. I’m also on Twitter @gameg_irl