In recent years, videogame companies have demonstrated an insatiable appetite with remakes. Every industry event is peppered with promises to bring back old classics, brighter and shinier than their original hardware could have ever allowed. These resuscitated games range from one-to-one remakes, such as The Legend of Zelda: Link’s Awakening, to complete overhauls, such as the impending Final Fantasy VII remake series. By picking and choosing the best (or perhaps, the most marketable) elements from the original titles, these remakes re-articulate gameplay and licensed characters to bring old games to new platforms. 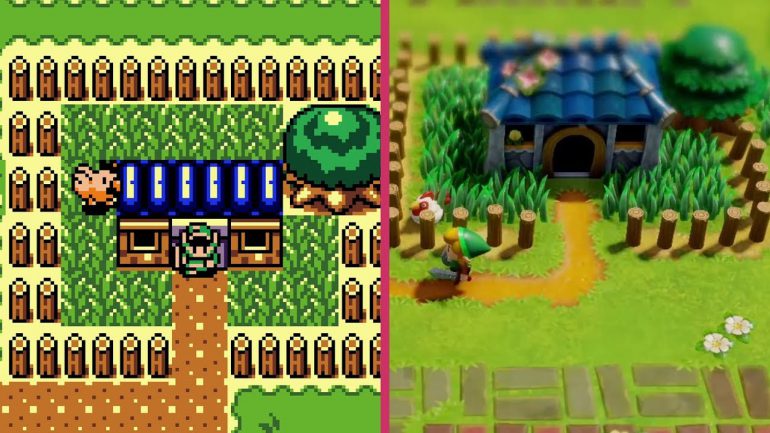 A comparison between the Game Boy version of Link’s Awakening (left) and the Nintendo Switch version (right).

However appealing these remakes may be, I find myself drawn toward an entirely different type of videogame reinvention: the demake. Where a remake strives to offer bigger and better versions of a game, a demake purposely takes a step backward: speculating on how a game could have looked if it were created for a less-advanced platform. 3D becomes 2D, polygons become pixel art, and detailed textures become block colours. The result is a game boiled down to its bare essentials — an exercise in extracting the raw essence of a title and transposing it into an antiquated aesthetic.

Since we’re all locked inside for the foreseeable future, I thought I would share a list of my personal favourite demakes. These games are all free and require minimal setup — making them the ideal pandemic entertainment. Some may argue that I wield the term “demake” a bit loosely, as I choose to also include a “genre demake” that attempts to recreate an entire style of game rather than a specific title. Regardless, these games all attempt to transform the new into the old, whether rooted in a particular franchise or genre.

Gang Garrison 2 is a free multiplayer demake of Valve’s Team Fortress 2, complete with the original title’s nine classes, frenetic team-based combat, and variety of game modes. Created in 2008 as part of the Bootleg Demakes Competition, Gang Garrison has had a remarkable longevity — boasting nearly half a million downloads over the past twelve years. While the player-base has dwindled somewhat over the past decade, the team has kept the game up-to-date, and a robust wiki serves as a great introductory tool for new players.

Team Fortress 2 translates surprisingly well into two dimensions, with the designers leveraging a comical 8-bit motif to its fullest. The only thing that is truly missed in the conversion is the ability to ambush other players — something that is impossible (save for the spy’s invisibility) due to the “entire level at once” sidescroller view. Instead of stealth, players must master some basic platform jumping techniques to get the drop on their opponents.

Gang Garrison 2 can be downloaded for free on the project’s website.

Surviv.io is a free multiplayer 2D battle royale game, originally released in 2017. Created in the wake of the battle royale boom sparked by PlayerUnknown’s Battlegrounds, Surviv.io attempts to mimic the style of such games using a top-down perspective and graphics that evoke 2000s-era flash games. Playable in most web browsers, and as a mobile app, players take control of an “orb-with-hands” avatar and must run around an island collecting weapons and fending off other players. As with any battle royale game, the last player remaining is the winner.

The greatest strength of Surviv.io is its low investment cost. No registration or installation is required to play the game and users can simply navigate to the website and hit the “play” button to get started. Despite its simplistic approach, it does manage to capture the frenetic feel of similar titles, and constant updates keep the metagame fresh. As an added bonus, voice chat simply does not exist in Surviv.io, eliminating the somewhat notorious, um, expletive-riddled cacophonies associated with titles such as Fortnite.

Surviv.io can be played in browser at its eponymous website.

A labour of love developed by avid Super Smash Bros. fan Dan Fornace, Super Smash Land is a painstakingly crafted demake of Nintendo’s perennially popular fighting game series. Created to mimic the look and feel of vintage Game Boy titles, Super Smash Land is a stylized interpretation of Super Smash Bros. — a hypothetical entry in the franchise’s platform-spanning history. Despite the Game Boy aesthetic, Fornace has included multiplayer as an option within the title, allowing up to four players to play locally (although don’t let this tempt you out of self-isolation!).

Super Smash Land may feel a bit weird to dedicated fans of the series due to its incredibly simplified control scheme, especially when considering the technical virtuosity required to play official titles at a competitive level. What it lacks in precision, however, it makes up for in charm. Fornace crams a lot into the confines of a faux Game Boy title, including unlockable characters and multiple game modes, and his interpretations of the lead characters succeed despite his self-imposed technical limitations.