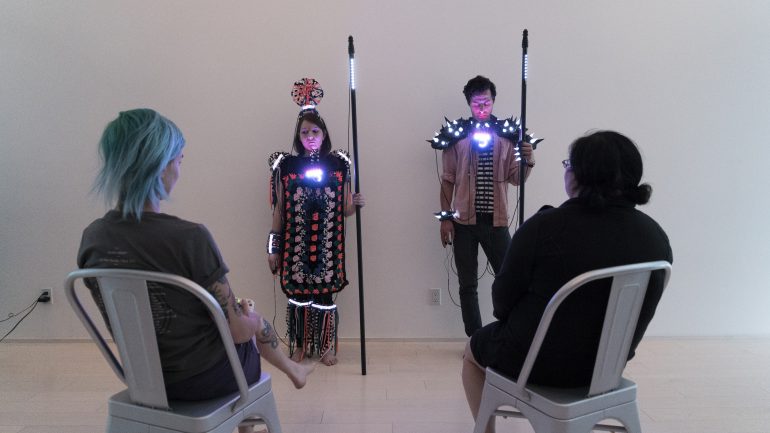 At the core of Alt-Ego is the idea that that epitome of the virtual, the avatar, becomes flesh.

At the beginning of the game, four participants divide into two teams each with a Player and an Avatar. A battle is then waged by the competing Players through the augmented costumes of their Avatars. The Avatars literally display great powers of attack and defense but cannot activate or control them. But they have one profoundly non-linear power of their own. They control a biofeedback system.

In fact, the Avatar’s ability to focus and control the biofeedback is absolutely essential to the Player’s ability to win the game. The biofeedback determines which Player wins the skill test this decides the attacker for each round. If the avatars successfully focus after the skill test, they also feed a Special Power for their Player which, although it can only be used once, will have a very significant effect on the game.

Alt-Ego plays with ideas of control and agency, of passivity versus action and of linear versus non-linear control. In the end, an apparently passive agent provides very powerful support to the visibly active agent -although the significance of this support is related to how difficult it is to control the nonlinear system. Alt-Ego asks; what does agency look like? What is the power of stillness and interiority? How does surface relate to depth?